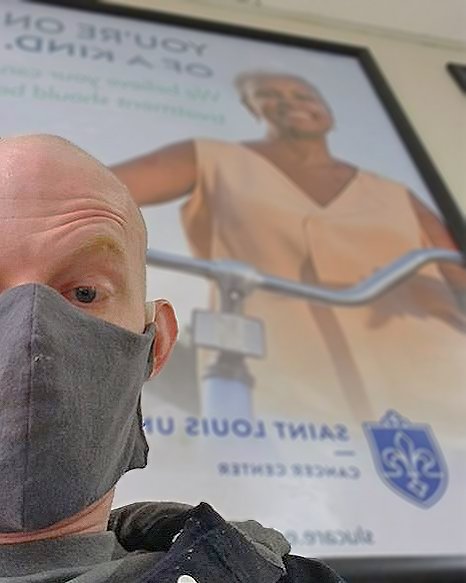 “I had scans done. My arms looked like a junkie, due to all the IVs in my arms. It was Stage 4. That’s the worst. That’s the endgame, folks. It took a few weeks before STL was able to accept patients (due to the virus), and that was such a defeating experience.  But I dealt, and surgery was done to my calf. A golf ball-sized chunk of leg was removed and along with my lymph nodes by my groin (this was the worst part of it).

“I can’t describe how bizarre it was for me. I’ve never been in the hospital myself. Never a surgery. Never a broken bone or anything. Every nurse asking questions was always shocked or surprised to learn that I was, by all accounts except for THIS, healthy as can be. For a 35 year-old, that’s something.

“So cut to weeks later and more tests to see what all this cancer is doing and where else it’s spread. Thankfully, the largest pieces of cancer were removed, but it’s moved on. Where in my body, we haven’t pinpointed yet. I’m still in this gray area. It could be months or years before it materializes and sinks into another area. Due to where it was located, it could end up in my stomach, but because of my fairly good health and bodily functions, it can easily travel to the brain which it has a high chance of.

“I keep rollin’ with it though. I have good days, bad days, and just plain ol’ days. I feel sluggish on the medication. For a whole month I was unable to walk. Though the calf area never hurt or caused problems, the groin area is what put me down for so long as the nerves in my leg were damaged and a tendon cut. That sucked. Honestly I’m not even describing fully the whole situation. It’s been rough. I’ve only recently started to walk normally again and feel active.

“There’s so much more of this story I’ve left out but I just wanted to get the main subject out of the way. There ya go. Now you know.”